Derek, Nick, Gordon and a couple of real Charlies.

Some days a man has to laugh.

Here’s everyone thinking The Somerton Man mystery is done and dusted: he’s been found, named, DNA approved, his family photograph unearthed, his background investigated, the problems with his wife widely disseminated, where he worked and who with  … so now it’s time to fold the tents and move on, yes?

Derek Abbott, bless him, has unearthed a family photograph with young Carl Charles (Charlie) Webb named (below) and which has been accepted wholesomely by his Facebook followers and broadcast nationally on the ABC. The news has also been spread and applauded worldwide. Everyone is agog. Abbott’s reputation further enhanced.

Reliable sources have reported that there was dancing in the streets of Glenelg on the night the show was aired and the local publicans were refusing to take money for the grog the celebrants were swilling. There is talk now of building a replica set of steps down to the beach from the road and an obelisk marking the very spot Carl Charles (Charlie) Webb was found.

Absolutely sensational stuff. But is this ^ Charlie the right Charlie?

Because we have dissenters, namely Gordon Cramer and Nick Pelling.

They both beg to differ. They are both sowing doubt. They are throwing their spanners into the works.

Gordon’s taken the image of Charles Richard Webb – who happened to be Carl Charles (Charlie) Webb’s nephew, him being the son of his older brother Russell R Webb – and with the assistance of Pete ‘Davo’ Davidson has come up with can only be described as a remarkable claim. And it must be admitted my old colleague Cramer is famous for his remarkable claims.

The thrust of their work is as follows.

They think it’s the blonde young Charles Richard Webb who ended up looking like the older, darker and deceased Carl Charlie Webb because he may have been involved in some sort of wartime experimentation that prematurely aged him and was the cause of the loss of eighteen of his teeth.

I think I have that right, with Gordon it’s hard to know. 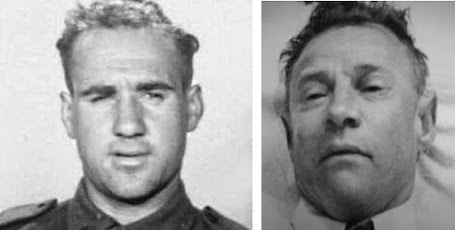 Now we can deal Nick (The Dome) Pelling’s spanner in the works.

Pelling too has taken a liking for the image of Charles Richard Webb in that he believes that in the family snaps of the Webb family the fair haired individual top right (ringed) is way too young and far too blonde to be the older and darker haired Carl Charlie Webb and is in fact Charles Richard Webb .

ie; there were two Charlies in the one family ..

There you have it. I think. Everybody is wrong. That’s not Carl Charles up there larking about, it’s his nephew Charles Richard.

And we still don’t have a pic of the adult Charlie, unless that’s him, the older looking nuggety little bloke top row left.

A man has to laugh.

From: Uncategorized
← Charlie Webb’s World
Charlie Webb here is supposed to be more than two inches taller than his brother, Roy Webb … But he isn’t. →
10 Comments Post a comment