Note: due to some mistakes made in interpreting the information contained in the hundreds of comments on Cipher Mysteries, I’ve made a few changes in the following post  …

A famous all round athlete and wrestler named Clarence Weber operated a large physical culture business in Melbourne where he and his partners instructed people in their methods and trained them to become teachers themselves. One of Weber’s partners was a man whose body was very robust. Very Strong. His body a beautiful shape. A real wedge shape. Broad shoulders. Narrow hips, Well-formed legs and he had the calves of a ballet dancer. Obviously a man of considerable strength and who was known to do his athletic gyrations on Glenelg Beach.

He was not Carl Webb however – his name was Reg Shorthose and it wasn’t in 1948. 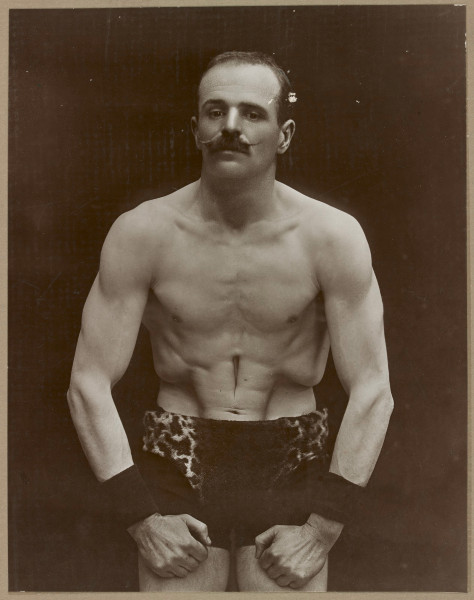 John A Rice, one of the partners in Weber and Rice.

Clarence Weber wrestled well into his forties, eventually retiring aged 45. His second wife Lavinia was a well-known physical culture advocate (who later became a politician and one of the first female members of State Parliament). Weber and Rice (and Reginald Shorthose in Adelaide with the name Weber, Shorthose, and Rice) ran a successful business. It was a shock to all when Weber died suddenly at his home aged 47. The businesses that featured the Weber name ran for years after his passing in 1937.

Clarence Weber (1882 – 1930) had four daughters by his first marriage and two in his second and given both his and his second wife’s passion for physical culture, it would not be surprising if one of their daughters decided to set herself up in the same business. What would be surprising would be if it was her number Webb wrote on the back of the Rubaiyat.

The following courtesy of Clive:

All we need to know is if one of Weber’s daughters married a Wilson, or Wilson had Webb in her classes. 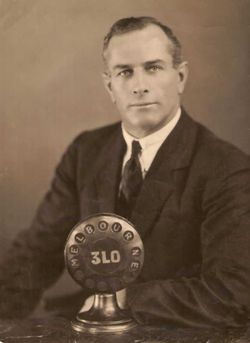 From what I (misca) can tell, the Weber & Rice outfit taught people their methods and trained them to become teachers. Once they were trained a certain amount of the money they earned went back to the main company. So, there were many teachers. It would be interesting to find out who Wilson is but the link might very well be his daughter Muriel.

Given the proximity of the addresses, is it possible that Dorothy and Charles had met Muriel? They were living at 274 Domain Road in 1941…She was at 279 Domain Road in the 1943 census. {thanks misca}

The above notes that more than 2,000 people attended the 23rd annual demonstration of physical culture and dancing by pupils of Weber Shorthose and Rice on 25 March 1936.

You may possibly be in South Australia one of these days, and seeing a lithe figure going through athletic gyrations on the beach at Glenelg on a Sunday morning, with girl and men companions, you might be curious to enquire into his identity.

It is Reg. Shorthose, South Australia’s Strong Man, lifelong friend of the late Clarence Weber, whose one purpose in life is physical development.

It is said that a man is as young as he feels, but there are few who at 50 years of age can jump over motor cars and ropes 7ft. 6in. high, and also provide thrilling gymnastic stunts just for the fun of the thing.

REG.’ SHORTHOSE says that he is faster now than ever before in liis life. And he has been at the work since he was 18 years of age.

This mercurial figure portrays youth to a marked degree, and there is more energy underlying his 50 summers than is depicted.

run over a similar distance every day. 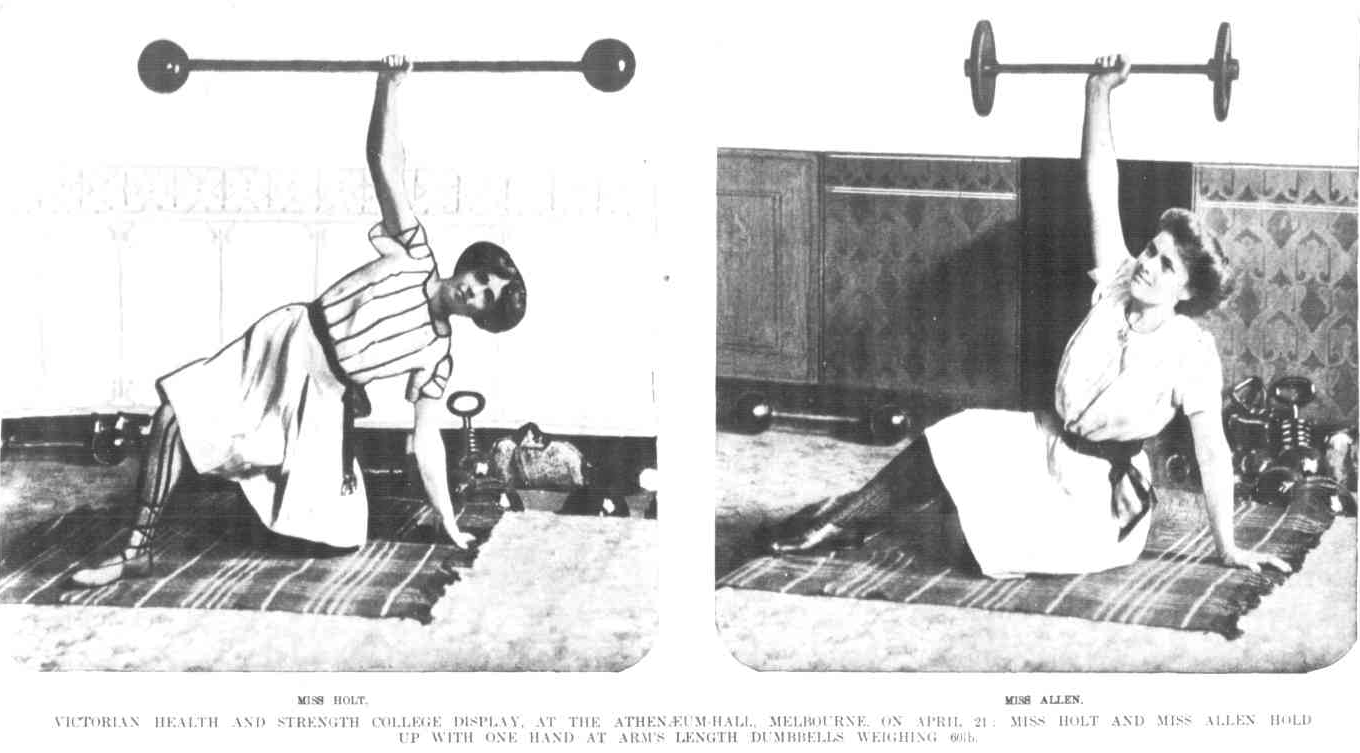 Weber and Rice exhibition shows promoted women and men, boys and girls (including their own family members). Women and girls had large roles to play in the performances of the Weber and Rice troup, with some feats of strength though the focus was on gracefulness and demonstrations of jiu-jitsu as representations of female physical culture.

Paul Lawson said of Carl Webb ‘His body was very robust. Very Strong. His body a beautiful shape. A real wedge shape. Broad shoulders. Narrow hips, Well-formed legs and he had the calves of a ballet dancer. Obviously a man of considerable strength. Strangely enough there were no body scars or signs of hard work. The hands didn’t show any signs or callouses you would expect from handling tools. They were quite smooth.’

… Who did gym in the early 20th century in Melbourne? 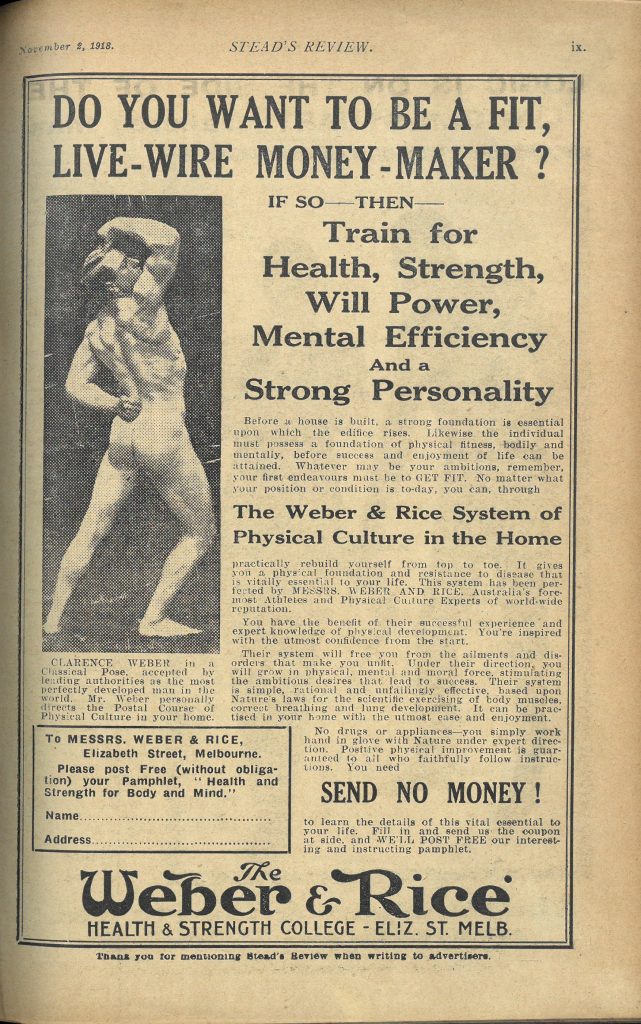 Weber and Rice were very successful in the body-building business and they also dabbled in a little mental healing to go along with it. Weber himself was very well-known as a wrestler as far back as 1904 when he was unfortunately beaten in a match put on by Wirth’s Circus by a man named Button Singh when Singh applied a sleeper hold that rendered Webb unconscious and inflamed the crowd to such a degree that Singh was last seen exiting the tent flat out still wearing his wrestling togs.

Physical Culture in Melbourne with Weber and Rice 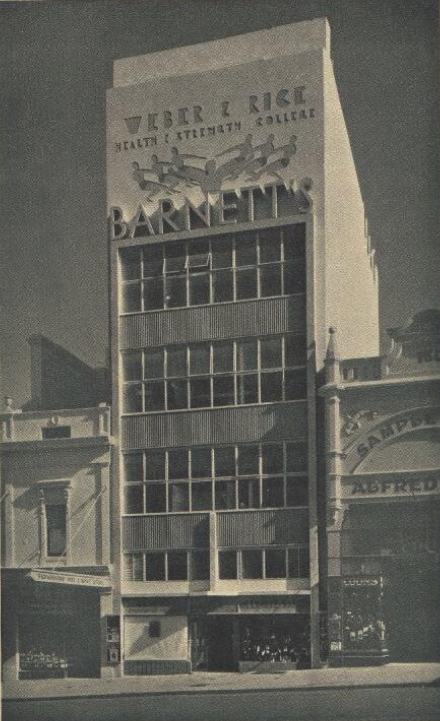 From: Uncategorized
← Carl Webb .. The Man Who Disappeared.
Where to now with Jessica Harkness’ involvement? →
43 Comments Post a comment