So much to do, so little time.

Despite this being a sworn account of Carl Webb’s violent behaviour towards his wife, it seems that more than a few folks over at Cipher would prefer to make excuses for him rather than commiserate with Dorothy whom he had kicked threatened and beaten regularly before finally throwing her out of her home almost penniless. The affidavit is also a testament to her faithfulness in that she always returned to him after being beaten, even nursing him after his first suicide attempt only for her to recount he said “I was a fool to help him get better.”

He was prone to radical changes of mood and exhibited aberrant behaviour.

(3) Compelling reasons for an individual to be recommended for a frontal lobotomy.

If the patient was found to be suffering radical changes of mood and exhibiting aberrant behaviour.

If the patient was found to be periodically violent.

If the patient was prone to being suicidal.

(4) The early history of lobotomies.

In November of 1935, Portuguese neurologist Egas Moniz performed the procedure for the first time in a Lisbon hospital. He drilled holes in the person’s skull and injected pure alcohol into the frontal lobe to destroy the tissue and nerves.

In 1949, he received the Nobel Prize in medicine for inventing the procedure.

As an interested observer of the human brain, Moniz studied certain mental disorders such as schizophrenia and came to the conclusion that it was a question of the nervous connections between the two frontal lobes of the brain, and the thalamus, which is a part of the brain responsible for our sensory impulses and for regulating our consciousness. He deducted that disconnecting the frontal lobes from the thalamus would be a way of calming the brain and the surges of schizophrenia, getting an individual back to his normal state.

The year after Moniz’s invention, 1936, an American neurologist named Walter Jackson Freeman adopted the procedure and renamed it the lobotomy. He modified the surgery by introducing the use of a surgical tool instead of alcohol, creating the prefrontal lobotomy.

In September of 1936, Freeman and his neurosurgeon partner James Watts performed the first prefrontal lobotomy in the United States.

Later, in 1945, Freeman modified the procedure again and created the transorbital lobotomy, which he could perform quickly without leaving any scars.*

In 1942, Freeman and Watts published the first edition of their classic monograph Psychosurgeryand reported on 200 patients: 63% were improved; 23% had no improvement: and 14% were worsened or succumbed to their surgery.

That same year the Journal of the American Medical Association (JAMA) published an editorial supporting the basis for the procedure and the indications for lobotomies. Additional prestige for the operation was gained when Moniz received the Nobel Prize for Physiology or Medicine “for the discovery of the therapeutic value of leucotomy in certain psychoses” in 1949. Facilities were for about 1,000 patients.

The first (recorded) frontal Leucotomy surgical resection of the cranial lobe undertaken in Parkside was by a Dr. L.C.E. Lindon in 1949 at Parkside Mental Hospital Adelaide, too late for Webb as he was found dead in late ’48, however given the popularity of the procedure in Europe and America and the consequent government savings resulting from reduced patient care we know Lindon’s was not the first to be performed in Adelaide (see 10).

An opinion you may share after reading this …https://www.wired.com/2011/03/lobotomy-history/

Walter Jackson Freeman became a big hit in America in the late thirties and early forties where he toured hospitals, performing the procedure and training psychologists to do it too. He even prescribed it for headaches. So many people wrote about Freeman’s work — he was a showman who invited press coverage — that he managed to popularize the surgery further. Of course, the lobotomy always had its critics. Doctors, as well as the families of patients, protested that the surgery did nothing more than turn people into vegetables. 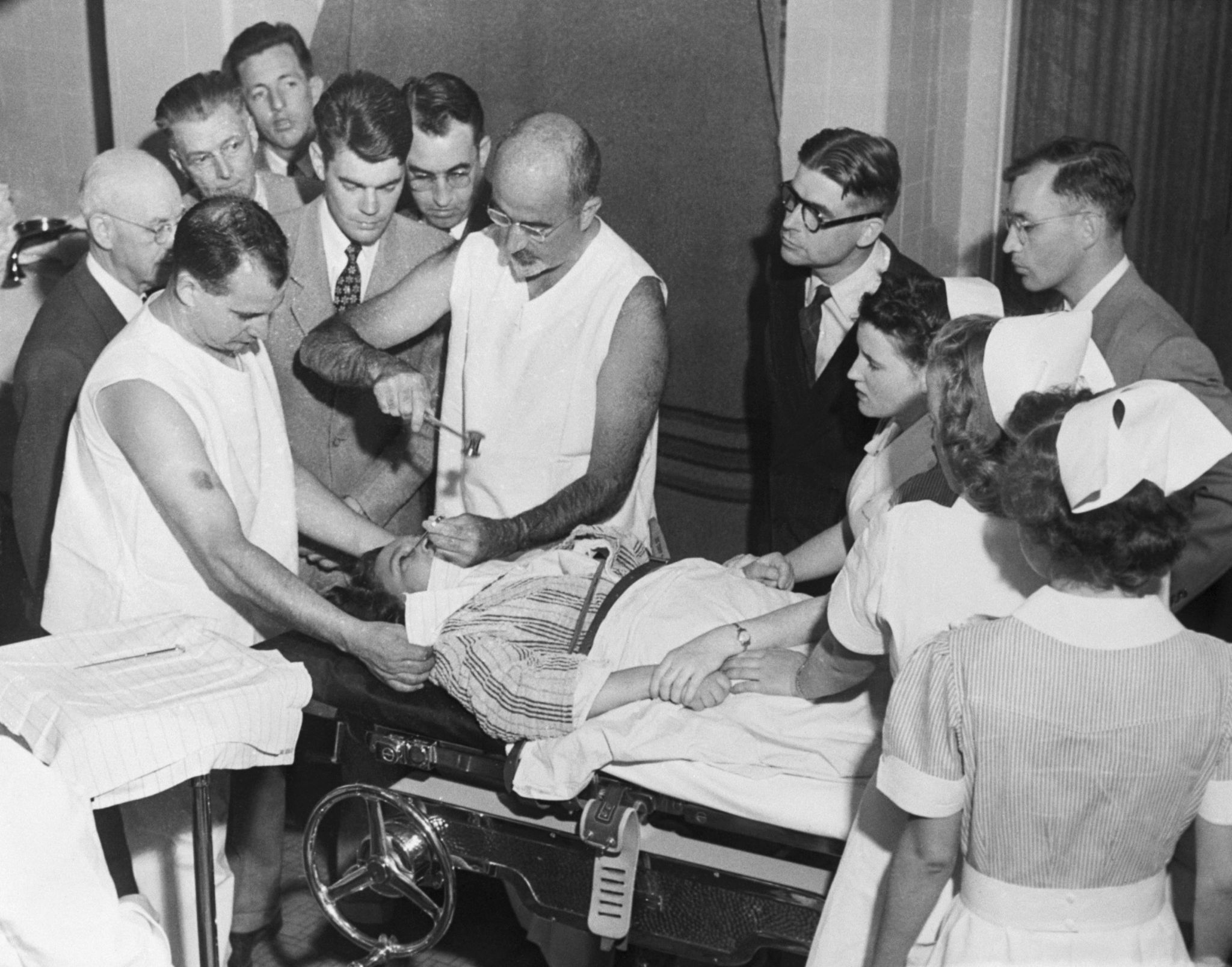 Freeman’s patients included Rosemary Kennedy, sister of the future US president John F Kennedy. She was left incontinent and unable to speak clearly after a lobotomy at the age of 23. 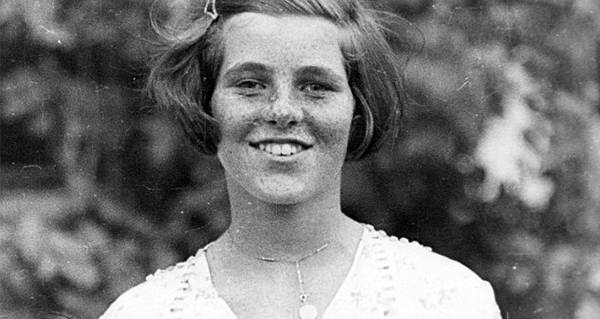 Her family did not visit her for 20 years while she was shuttered away in the institution. It wasn’t until after Joe Kennedy suffered a massive stroke that Rose went to go see her daughter again. In a panicked rage, Rosemary attacked her mother during their reunion, unable to express herself any other way.

Over the course of his career, Freeman conducted lobotomies on 3,500 patients, including 19 children, the youngest just four years old.

Freeman’s counterpart in the UK was the neurosurgeon, Sir Wylie McKissock, who carried out his own variation of the lobotomy on about 3,000 patients.

(10) When was the first recorded lobotomy performed in Adelaide?

The first leucotomy in Australia was performed on a female patient in Adelaide in 1945.

“We know that the first leucotomy in Australia was performed on a female patient in Adelaide in 1945. Normally in the history of medicine, the ‘first’ of any new procedure is well recorded, but in Western Australia we only know the patient who was operated on, and the date on which it happened (8 November 1947). It is not clear which hospital the procedure took place in, or who the surgeon was.”

(11) How was a lobotomy performed in the earlier days of the procedure?

The procedure, which his father, Walter J. Freeman, popularized and perfected, involved first knocking the patient unconscious with two or three jolts of electricity from an electroshock therapy machine. “I was there to hold the person’s legs down,” Frank Freeman says. “We all went for a ride when he threw the switch.”

After the convulsions subsided and the patient lay insensate, Walter Freeman lifted the patient’s eyelid and inserted an ice pick-like instrument called a leucotome through a tear duct*. A few taps with a surgical hammer breached the bone. Freeman took a position behind the patient’s head, pushed the leucotome about an inch and a half into the frontal lobe of the patient’s brain, and moved the sharp tip back and forth. Then he repeated the process with the other eye socket. 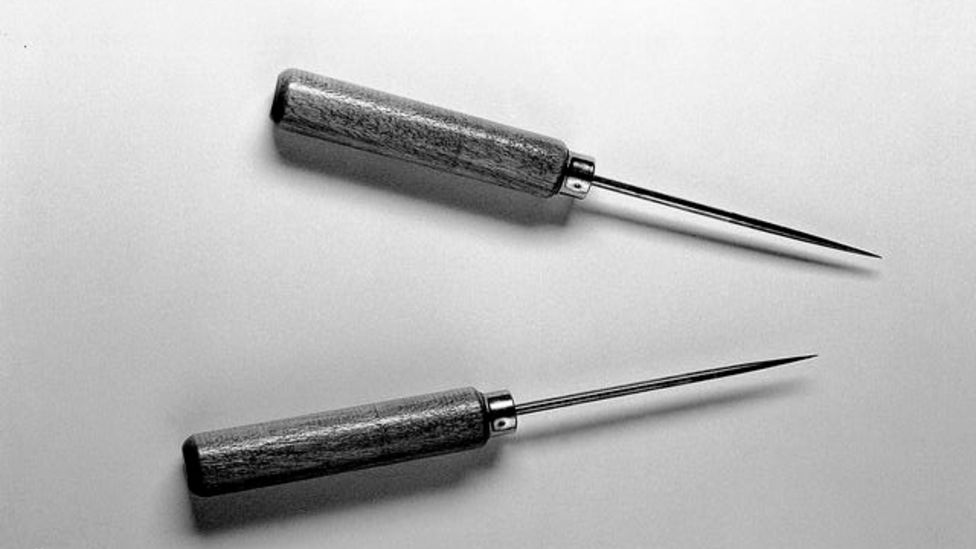 Lobotomy instruments that once belonged to Walter Freeman

(12) What might have Carl Webb used to kill himself?

Webb’s first attempt failed after his wife Dorothy found him in a soaked bed. “The smell of ether was so strong that other tenants complained. I found empty bottles and after a struggle got him to tell me what else he had taken, namely 40 Phenobarbitel tablets.”

Phenorbital can be used to relieve anxiety. During the second half of the 19th century ether was in vogue as a recreational drug in some places, becoming especially popular in Ireland, as temperance campaigners thought it was an acceptable alternative to alcohol.

Webb was thought to have finally killed himself using a glycoside, a fatal poison commonly sourced in pharmacies in the post war period without the need of a doctor’s prescription.

(13) Am I dreaming or could there be a possible connection between Chemist Freeman’s pharmacy in Glenelg and Webb being able to purchase the glycoside that killed him?  Could the reason for keeping Freeman’s name hidden for over seventy years be that he was the pharmacist who sold the glycoside to Webb as well as being being the owner of the car parked outside his shop and into which Webb tossed of his Rubaiyat? Coincidence, right?

(14) Why weren’t any scars found on Carl Webb to indicate he had undergone a lobotomy?

Later, in 1945, Freeman modified the procedure again and created the transorbital lobotomy, which he could perform quickly without leaving any scars.*

(15) Was Professor Cleland similar in any professional way to the Portuguese neurologist, António Egas Moniz (1874 – 1955).

Monis was an interested observer of the human brain, he studied certain mental disorders such as schizophrenia and came to the conclusion that it was a question of the nervous connections between the two frontal lobes of the brain, and the thalamus, which is a part of the brain responsible for our sensory impulses and for regulating our consciousness.

Professor John Burton Cleland was a scientist / pathologist who studied laboratory samples of body tissue for diagnostic or forensic purposes.

(16) What organs did Dr Dwyer remove from the body of Carl Webb during the autopsy?

(17) Why did Professor Cleland want to examine a sample of Carl Webb’s brain?

(18) What was the relationship between Professor Cleland, Paul Lawson and Parkside?

(19) Where can we find a burrower good enough to gain access to the the Parkside (now Glenside) employee lists of ’47 / 48? 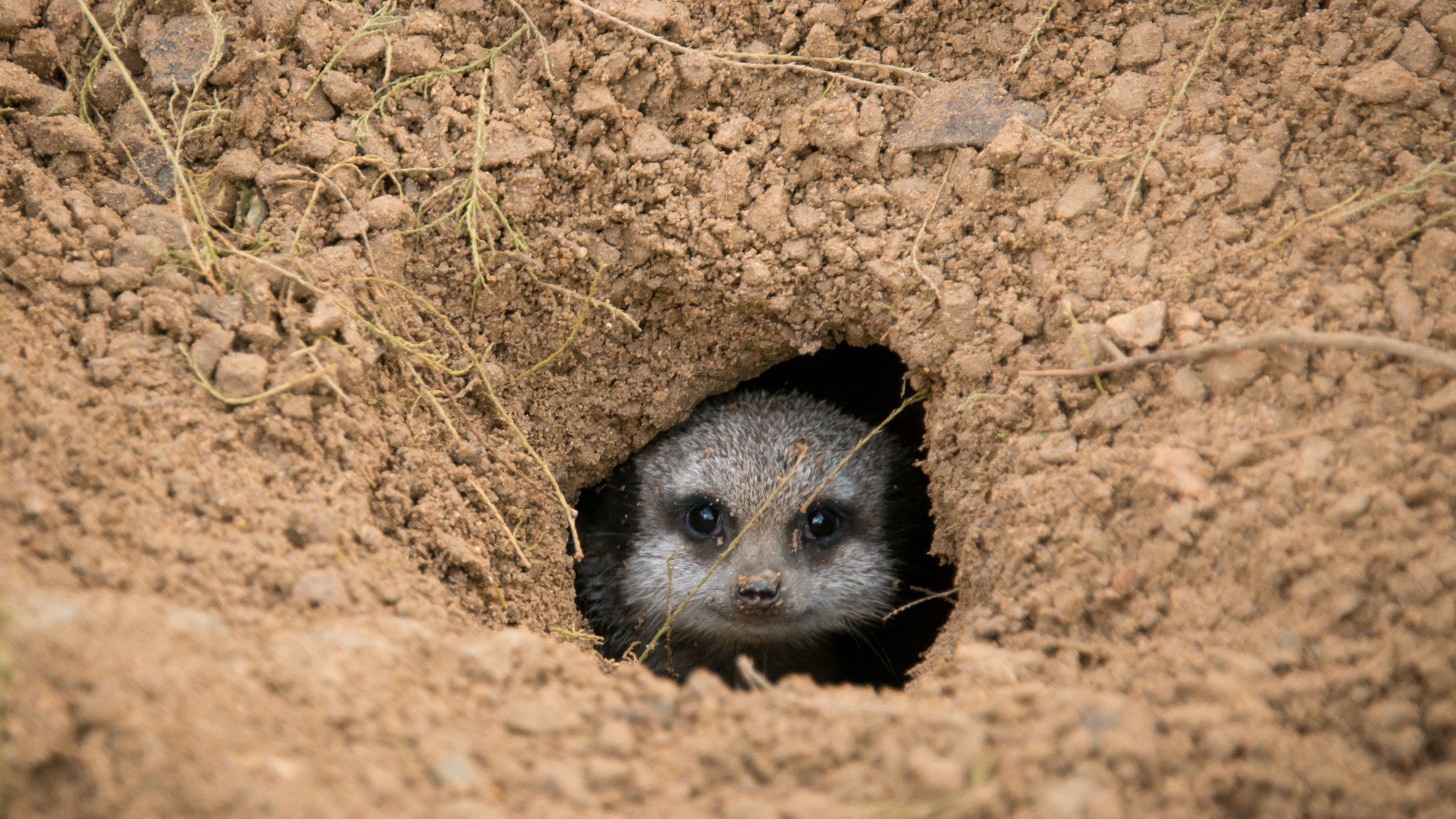 Dorothy Parker (1893 – 1967) was an American poet, satirist, writer and critic, known for her many quotes, such as “ Beauty is only skin deep, but ugly goes clean to the bone.”

From: Uncategorized
← The Truth About The Somerton Man.
Two egregious failures in the police investigation. →
17 Comments Post a comment