Imagine a human brain sitting inside a skull attached to an unidentified body that has been lying on a gurney and refrigerated in a mortuary for six months and during this period dozens of visitors have requested permission to view the corpse, thinking they might know the owner. I mean, imagine treating a leg of lamb that way, in and out of the fridge for a poke and a prod every couple of days for six months.

This particular brain had already been examined during autopsy and highly motivated personal research has determined that after such an examination, which necessitates the complete removal of the object, the brain is put back into the cavity from where it was removed, a task that would require the use of both hands (see pic) as detached cranial matter is both heavy and slippery. 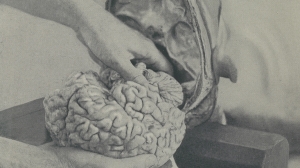 The skull cap is then replaced and the skin flap stitched back on, a procedure which has the effect of disturbing the features of the corpse. This cause and effect may well allay the fears exhibited by some that Webb’s pre-autopsy photo looks markedly different from his post-autopsy photo.

Perhaps a kind soul might pass this information onto my colleague Mr Gordon Cramer who no longer welcomes my approaches, not that I make any these days.

So, here we have a situation where on 15 June 1949  Detectives Brown, Noblet and Leane, together with Professor Cleland have arrived at the mortuary to inspect and approve Paul Lawson’s plaster work. The police find everything is in order, however Cleland is mightily displeased as his request for a sample of Webb’s brain had not been met. Lawson is asked to cease unstitching the skin covering the detached portion of the deceased’s skull and Cleland leaves empty-handed. Fuming. Like Webb’s six month old brain.

This is where we ask, ‘What possible use would Cleland have made of such a ghastly object?’

I recently asked this question on Nick Pelling’s Cipher Mysteries site and was met with a deluge of silence, those folks are much more interested in Webb family matters and all the more strength to them, but it is such a boring subject. I mean, zzzzzzzz.

Back to it, and this is where it gets exciting.

WL Cleland (the Professor’s father) was born in Hong Kong in 1847 and migrated to South Australia, arriving in Adelaide in August 1852. He was educated in Adelaide, and afterwards studied in Switzerland, England, and Edinburgh, then returned to found a lucrative practice in Adelaide. He was appointed Resident Medical Officer at the Parkside Lunatic Asylum in December 1878, and Assistant Colonial Surgeon in 1879, a year after the birth John Burton. In 1896 he was appointed Acting Colonial Surgeon. He died in 1918.

Oh, be still my beating heart because now we have linked Cleland and his father to Lawson’s workplace and it doesn’t require much imagination to see the entire Cleland family eating a Sunday dinner of roast lamb, potatoes and peas as WL told illuminating stories of examining a brain during the autopsy of some poor soul who expired unloved in the Parkside Lunatic Asylum. Young Bertie would have been entranced as his father told him of lunatics who killed, raped, dismembered and murdered their way into the wretched rooms and cells of the asylum. Locked away until they died but not before a medical interest in their bodies became an established practice. In their brains to be more concise, despite the tragic consequences of experimental work undertaken by American doctors in the 1940s.

‘Electro-Convulsive therapy was not the worst treatment used at Glenside by a long shot, in the 1940’s the American surgeon Walter Freeman had invented his own form of Lobotomy, ‘The Trans Orbital Lobotomy’. This lobotomy technique used an ice pick to stab through the skull behind the eye socket and scramble the frontal lobe on both sides of the brain. Often the patients weren’t administered an anaesthetic for this procedure, they would just be given E.C.T until they were in a catatonic state and then operated on.’ jimsurbex.com

The first Leucotomy (the surgical cutting of white nerve fibres within the brain, especially prefrontal lobotomy, formerly used to treat mental illness) performed in Australia was under-taken at the operating theatre at the Parkside Mental Hospital on 10th October, 1945. The operation of prefrontal Lobotomy was performed by Dr L. C. E. Lindon (now Sir Leonard Lindon). The patient was a 30 year old female who had spent the previous five years in hospital and was extremely difficult for the nursing staff to manage, and despite intensive care with the treatments available at the time, improvement was never maintained.

Surgical interest moved with the times and experiments on live tissue were replaced with experiments on dead tissue. Surgeons and scientists were interested in finding if a mass murderer’s brain was in any way different to that of an ordinary man. This led to further experimentation in the area of child abuse perpetrators for instance, where they developed procedures to determine whether a paedophile’s brain had characteristics that were in some way different to that of the ordinary man in the street.

Carl Webb we have been told was a sullen, bad tempered man who would retire to his bedroom for the night when offended, sulking.

But there is no record of Webb being a murderer, rapist or someone having sadistic tendencies.

So why did Professor Cleland have such an abiding interest in Carl Webb’s brain? Or was the good Professor born before his time?

It can be noted that Professor Cleland is on record as being known to sniff along the entire length of human intestines in the quest of identifying if any poison was used in the death of the disembowelled owner. A herculean task, given the large intestine could be five feet long and the smaller up to fifteen feet.

Professor Cleland was also planning to visit New Guinea before an illness prevented him from travelling to the highlands on a quest to gather the region’s cannibal recipes.

From: Uncategorized
← Soapbox 2 “Paul Lawson told Clive Turner DS Leane knew the Somerton Man’s identity.”
Lawson sat in a darkened room creating the bust while his every move was being watched by a detective who was guarding the door.” →
18 Comments Post a comment