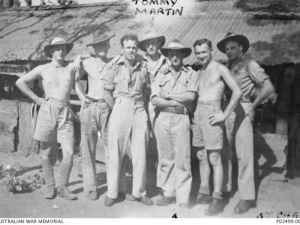 From what we know, engineer Alf Boxall was a man well used to hard, greasy labour and who had a war record of serving in relatively remote though safe areas like the far north which if it’s anything like it is now for a large group of men collectively encamped and singularly employed it would have been a little on the riotous side when the weekly grog rations came through. The same rules applied in the South Australian fruitpickers’ camps in the sixties where a youth from Sydney might have found himself stranded for a couple of months in his quest for meaningful post-school life experiences.

Take Tommy Martin’s mob (pic)   … all gentlemen no doubt but a little unruly on the turps and you can take it from the youth previously mentioned that after some time away from the girlfriend a man’s romantic notions might have him visiting the local ladies whether they be in Darwin or amongst the local inhabitants, and there weren’t too many reserved young women amongst them.

So, here’s Alf with a spell in the far north under his belt and another working on the water and in the maintenance sheds on Sydney Harbour; hard, dirty labour on both accounts and who walks into the bar where he’s rounding up the working day with his pals and a ‘very reserved young woman’ and her companions

Public bars in those days were not places for quiet drink with the ladies. They were noisy and usually full of working men in the late afternoon of a working day and of ‘very quiet young girls’ there were very few. As a matter of fact of women there were very few, perhaps an old crone or two sitting in a corner nursing a gin and grievances. The young girls had a Ladies Saloon for their exclusive use and a man would rather wander into the ladies toilet than be caught walking into one of those places.

Fights were as common then as they were in the sixties when the youth mentioned above had the pleasure of working in a couple of Sydney hotels where an early sign of something unpleasant brewing wasn’t the raised voices or sound of smashing glasses, it was the sight of the older fighters retiring to the walls and taking off their wristwatches prior to leaving them on a high shelf with their unfinished beer.

Then everyone got stuck in.

These were not the places for ‘a very quiet sort of girl.’

In about October 1946 this ‘very young girl’ had a successful intimacy with an unknown man whereupon she immediately tossed her job and moved south to Mellbourne where this ‘very reserved young woman’ convinced a married man to dump his wife and accompany her to Adelaide.

Somehow all that doesn’t hang together and leaves a man wondering if Alf made it all up, all that stuff about someone being very young, very quiet and reserved.

Made it all up at someone’s bequest in order to give a woman an alibi and remove her from the attentions of the authorities on account of the identity of a man she knew who was found stone cold dead two hundred yards away from her home.

*Lyric to a song written by HC Penny and sung by the late Dean Martin.

She was a very quiet sort of girl ..’

I swore – but was I sober when I swore?

And then and then came Spring,

‘.. she would be a very reserved young woman.’

Littlemore: ‘That’s funny isn’t it, because she knew yours.’