Here we go again with the code  … as if it hasn’t been flogged to death a hundred times. A thousand if you include Gordon Cramer’s contributions in the mix: that bloke is everywhere but still not getting us anywhere.

Just for once I’d like to see GC do the same z-ray, ultra-violet, acid-wash routine with a photo of the inside of a Rubaiyat the same vintage as the one given to Boxall to see if he gets the same result.

But that’s not going to happen.

I reckon the five lines of code are in fact four and line 2 didn’t belong where it was first put, was crossed out, corrected and transferred beneath the X as line 3. The correction being to drop the I and add A I A Q C.

Who are those digits? What are they?

And the reason it was transferred was that is didn’t have that weird thing that isn’t really a W and not really a M as the first character. It’s not as if the person who wrote them couldn’t do a regular M, there’s 4 more in the code to prove it, despite the wiggle on the M in the last line.

So, if the weird one isn’t a letter from the Roman alphabet it can only be something else, and I’m thinking it’s not from another language because who would do that?

Is it an ‘arrangement’ of something? All the not W’s and not M’s on top of the X, everything else under it, the real M and the I.

Like X is the delineator. Meaning X determines the placement of whatever the four lines of characters represent. Either above or below.

And what’s with all the letter A’s? Isn’t E supposed to be the most commonly used letter of the alphabet?

So many questions, but the more of them you ask the better chance of having one answered, right?

So, go ahead, answer one and make our day. 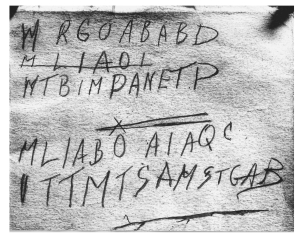