One question that has often been asked is where Jessica Harkness was between the months of November ’48 and July ’49, if not for the entire period then for part of it, particularly from late November.

I’ve no idea when this letter (below) was written and to whom Jessica was writing – what you see is all I have – but it indicates that at one time she was out of the country and for quite a long period. Perhaps not for the first time. 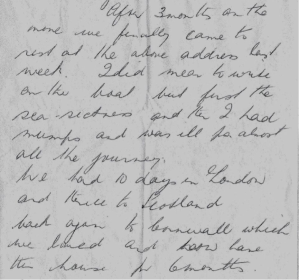 The proposal I’m putting forward is that Jessica may have been overseas or interstate on or about November 30th 1948 and that being so it may provide an explanation for her reaction when confronted with the news that a man had been found dead close to her home.

It would be unusual for a resident living so close to the site where the Somerton Man’s body was found not to know about it. People talk about that sort of thing and the Adelaide newspapers published regular articles together with images of the dead man from as early as December 2nd. The local pubs too would have been rife with rumours about how this well-dressed, unidentified man ended up dead on their beach.

If Jessica had seen pictures in the Adelaide papers of the Somerton Man’s face she must have known he wasn’t Alf Boxall and would have told Canney so, saving him the trouble of asking the NSW police to check on Boxall’s whereabouts.

But she didn’t and he did.

If Jessica did know the identity of the body the same logic would have applied. She would have told detective Canney it wasn’t Boxall, saving him the trouble of asking the NSW police to check on Boxall’s whereabouts.

But she didn’t and he did.

One explanation for this conundrum is that Jessica was not in Adelaide to see or read the many newspaper accounts of a body being found close to her home and was surprised to be visited by detective Canney when, in all innocence, she answered his questions and gave him what she thought was relevant information concerning her relationship with Alf Boxall.

However, when Harkness was taken to view the bust she thought was of Alf Boxall, she was almost overcome with what could only be described as a shock of recognition so profound it rendered her incapable of answering any questions other than by saying no.

A shock so traumatising she wouldn’t even look at the bust again, preferring to fix her gaze on the floor of Lawson’s office until the ordeal was over.

Harkness knew who the the Somerton Man was – that’s been obvious all along – and her dramatic reaction to seeing his bust makes it likely she had not been aware until then that he had travelled to Adelaide only to die almost at her front door.

So, that’s the end of our grand theories that had Jessica and Alf concocting a back-up alibi to get her out of a tight spot.