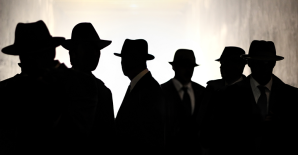 Some hold the view that the Rubaiyat and Tamam Shud slip torn from the last page were part of a covert recognition arrangement between two parties (spies) unknown to each other but each with a common purpose. To put this theory into proper context we would have to place the spies in a hostile environment, Adelaide say, and one of them would have some secret information he wishes to pass on to the other, a coded message say.

The subtle mechanics of this operation would require that a third party (Control) be responsible for sourcing (printing?) a Rubaiyat and tearing out the slip before sending them on their separate ways, one to each spy.

Now we have two articles that need to be delivered covertly so the spies could use them in a covert recognition arrangement.

This would require that two additional covert recognition arrangements be made (one for each spy), unless Control was confident mail to the spies’ addresses was not under surveillance and possible interception by the local security agency.

Perhaps Control delivered the material to an embassy under the cover of diplomatic mail where it could be picked up by the intended recipients, but once again he is faced with the danger of having embassy arrivals and departures being watched and the spies identified. Besides, what would be the use of a covert system if both spies were able to meet in the embassy?

Once we’re past these difficulties we’re faced with the prospect of having the agents meet where one hands over his slip and the other examines same before any information is passed over. To do this successfully he would have to be sure the slip fits into the tear and the book’s paper type matches that of the  slip.

However, prior to this one-on-one meeting both spies would need to have in place a recognition routine in order to be confident of approaching each other from a safe distance. One might be carrying newspaper under his left arm if all was well and under his right arm if this was not the case. In that instance a back-up meeting would be required.

If all was well there may be yet a another recognition process required where one spy might ask of the other, ‘Is the fairground open today?’ and the other spy’s response might be ‘only on Tuesday’s.’

With all that successfully behind them, any transfer of secret information should be safe to complete.