There’s an elephant in the room !! 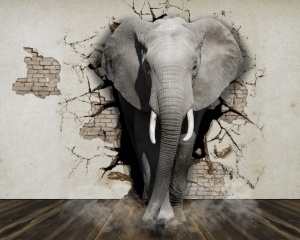 And it’s not like it just walked in  .. there’s been an elephant in the room since Freeman handed in the Rubaiyat in 1949, that’s how long we’ve been ignoring it. I was only five at the time but I’ll put my hand up … but what about everyone else?

Talking to you, Dude, misca, Sanders, Clive, BarryT, Boris, Petedavo, Mr Smith  .. plus the lurkers. And I’m thinking that J Ruffles and G Cramer might be amongst them, maybe a few more from Prof A’s FB site, but I know that they are forbidden to comment here on the pain of excommunication. Beats me why. Even Catholics aren’t that buttoned up.

Then there’s the elusive Milongal, but I know he’s conceded one visit. 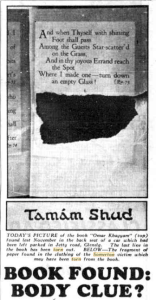 Why hasn’t ANYBODY come up with a believable explanation for the two items that have made the case into the monster it has become? Every time some outfit runs a TV bite or a newspaper produces an article all we get is the same tired old thing. It’s enough to drive a man to drugs. Speaking of which, will you excuse me for a moment or two here.

Dome had a shot at it a few years ago when he proposed that the book was left in a resold (hot) car by the bloke who sold it just in case he was stiffed if the buyer’s cheque bounced.

Then all he had to do was roll around to wherever it was parked, bang on the buyer’s front door a few times and when he opened it shove the slip and the bounced cheque in his face, take him out to the car, show him the book he’d tossed into the back footwell then demand the keys. In other words he was able to prove prior ownership in a kind of legally unenforceable way.

That was back in the day when Prosper was the first horse out of the stalls in the Whodunit Stakes.

I know what you’re thinking. Dome wasn’t up to date with his Agatha Christie novels.

Yeah, well, nice try Nicko, thanks but no thanks.

And that’s it. Theory the one and only. You have to give him that.

Anyone else got anything else? Because unless someone is able to slot those two items into their narrative then they don’t have one.

And if I get a pun out of you this time, Turner, your immediate future on this planet is not assured.