A phone call from Paul Lawson

About halfway through a very pleasant conversation this morning I asked Paul Lawson a pretty tough question for a man 102 years old.

‘In June 1949, five days before my fifth birthday, Detective Brown came into the morgue while you were working on the bust and asked you for an interview. Do you remember that, Mr Lawson?’

Lawson laughed and said no, so I tried another question.

‘Do you remember being interviewed by Stuart Littlemore in 1978 when you abruptly stopped answering his questions?’

‘Well, I didn’t want to be the one to give away anything to do with case that was not already known, as it was still active.’

‘We knew Jessica Harkness was connected to Alf Boxall in espionage. She was working for another country and was in charge (of the relationship). The book she gave him contained a sign to that effect.’

‘Where did the name Jestyn come from?’

‘That was her codename.’

Littlemore also interviewed Alf Boxall, who delivered one of more memorable lines from someone directly involved in the case when Littlemore asked if Jessica Harkness might have known if he was ‘involved in Intelligence.’

Boxall paused: 1 second, 2 seconds, 3 seconds, 4 seconds, 5 seconds then said, ‘Only if someone else told her.’

That response, to my thinking, does not constitute a denial.

During this interview, Boxall retrieved the Rubaiyat Harkness had given him and handed it to Littlemore, who thumbed through the pages until he arrived at the inscribed flyleaf. 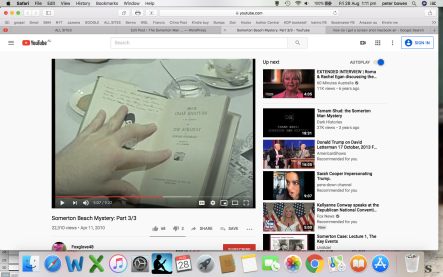 The Jestyn sign-off had been covered with tape. So as late as 1978 Alf Boxall was still keeping things very close to his chest, including the codename of his handler, Jessica Harkness  – according to Paul Lawson.

Then, in 2010 Gerry Feltus published his book The Unknown Man and in it he included a picture of the same flyleaf (below) with the codename Jestyn visible.

Unfortunately, Feltus was not able to meet Boxall and we can only assume the Boxall Rubaiyat was in the possession of Derek Abbott, who was first to make public the name Jestyn in about 2009, incorrectly assuming it was her nickname.

.. The tape used by Alf Boxall to cover up Harkness’ codename when showing it to Stuart Littlemore in 1978.

My last question to Paul Lawson was if he still had an interest in the case. He replied that he did, then we agreed the whole matter was most confounding.

And thanks to Clive for the introduction to PL  .. we talked for about fifteen minutes and I spun him a few yarns about Alf I’d learned from Keith Roll, including the time he shaved off the struts of a Harley Davidson and beat the yanks at their own game in a couple of motorbike races in NG. Keith served with Alf on the Crusader and was the man who gave his eulogy.

Note: no use has been made of anything published on tamamshud blogspot despite Gordon Cramer’s claims to the contrary.