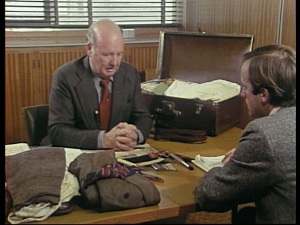 “Detective Sergeant RL (Lionel) Leane was at that stage (Nov 1948) one of a very small number of senior members holding that rank within the CIB.

He was directly responsible for overseeing general matters requiring direction and the supervisor of junior investigators.”

In the initial stages of the case Detective Strangeway (Glenelg Police Station) was delegated the duty of investigating the suspicious death, assisted by Detective (Hec) Gollan and Const. Sutherland.

On 8th January DS Leane was placed in charge of a dedicated Investigation Team which included Detective Gollan and Constables Sutherland and Horsnell.

Leane learns of an unclaimed suitcase.

On 14 January, after Leane had been enquiring with the staff at the Adelaide Station cloak room he learnt there was an unclaimed suitcase in their racks.

Later the same day Leane visited the cloakroom and took possession of some of the items in the suitcase, leaving the case in situ.

Leane arranges for certain items from the suitcase to be photographed.

Leane arranges for a photographer (unnamed) to take a picture of five items taken from the suitcase and laid out on a Masonic leather folder placed on a detective’s desk.* 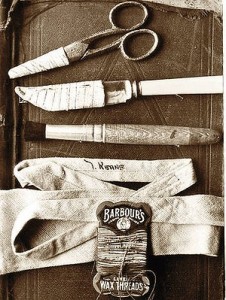 Leane collects the suitcase from the cloak room.

“At some stage” Leane collected the suitcase from the Railway Station.

Leane visits the School of Arts and Crafts.

Leane interviewed a Mr. Gray, the headmaster, who told him the the cut-down knife was, in his opinion, suitable for starting letters off and the scissors used for cutting around the letter.

Leane interviewed Hugh Possa who was of the opinion the coat worn on the body was of American origin or made by someone in Australia who was familiar with ‘feather stitching.’

Cleland also found that although tags had been removed from the clothing, he did not find any (loose) thread to indicate they had been recently removed.

On 18 January Leane compiled a very comprehensive report for the interstate police and media, including photographs and background together with recent developments and a list of property. This was followed up by another report on 29 April.

On the 19th April, 1949, Professor Cleland informed Leane that he had found a small piece of paper in the fob pocket of the deceased’s trousers bearing the word Tamam Shud.

On the 15th of June, Leane, Brown and Detective Noblet inspected the completed bust.

A copy of a Rubaiyat with a hole torn in the last page is handed to Leane.

On the 23rd of July a ‘Mr Francis’ visits the Adelaide Detective Office and hands Leane a copy of the Rubaiyat with a hole in its back page that matches the Tamam Shud slip found in the deceased’s fob pocket.

Leane soon noticed what appeared to be a telephone number written in pencil on the back of the book.

Leane notices the capital letters written in pencil on the back of the book.

Using a large magnifying glass, Leane also saw capital letters written in faint pencil on the back of the book.

Leane and others convey the nurse to view the bust.

On 29 July 1949 a photograph of the letters and a copy of a similar Rubaiyat were forwarded by Leane to the Director of Naval Intelligence in Melbourne.

The capital letters were “written in faint pencil” – they were not impressed from another surface.

Result of the police marking up the letter R

Leane’s list of items found in the suitcase include two pairs of scissors, one of which was broken

Feltus only lists one pair,.

Leane also lists the a box of Bryant and May matches as being found on the body, which is in dispute with the list of items on PC Moss’ deposition

Feltus found that the matches were ‘later established’ to be ‘with’ the body.

Header pic is Leane being interviewed by Stuart Littlemore

*info as received from GF.

From: Uncategorized
← The tools and the meaning of his life as we know it
Was The Somerton Man an Artisan ? →
2 Comments Post a comment